If you want to talk about Monmouth University Football, Quincy University Basketball, Notre Dame Men's Soccer, or whatever, this is the place.
Post Reply
38 posts

Assuming the MAC takes Western Kentucky and Middle Tennessee State, where does that leave FIU, Louisiana Tech, and UTEP?

UTEP - I don't think the Mountain West wants them, as they're at 12 football members currently, which seems like they're pretty happy with, especially with schools like Air Force and Colorado State recently making it clear that they're not leaving. Rumor is that Boise State and San Diego State are waiting on invites from the Big 12, but that doesn't look like it'll happen this time around (if it did, that could open up spots for the MWC to either look to UTEP and NM State, or maybe inviting up the Montana Schools). My best guess at this point is that you could see UTEP decide to try to be independent in football, and put their other sports in the newly restructured WAC. This could also work well for them if (as is often rumored) the WAC does want to move up to FBS en-masse within the next decade.

Louisiana Tech - If they had a shot at the Sun Belt Conference, they would have jumped already, and they don't really have any other realistic shot for another FBS conference. Like UTEP, I think their best bet might be to look towards the Southland for all sports outside of football and go Independent for football. It would help reinforce the Southland, which has lost a number of schools to the WAC, and they would be in the same group as 5 other public schools in Louisiana, plus a few in Texas, which would make for a very tight all-sports conference (all except Texas A&M-Corpus Christi and Incarnate Word would be bus trips).

FIU - Honestly...maybe the same with FIU, just with the ASUN. They'd end up with 4 conference-mates in the same state (Florida Gulf Coast, Jacksonville, North Florida, and Stetson).

At that point, you've got enough FBS independent schools that they could conceivably make their own independent scheduling agreement made up of: Army, Florida International, Liberty, Louisiana Tech, New Mexico State, UConn, UMass, UTEP. If they all agreed to play each other each season, that'd give each team 7 games already scheduled and 5 they could schedule on their own. I know Notre Dame is technically "independent" for football, but they've got their own thing going with consistent rivalries (USC, Navy, Stanford) and a scheduling agreement to play 5 games a year with ACC teams, so I didn't include them in this "misfit conference" of independent schools. Anyway, that'd look something like this: https://www.google.com/maps/d/u/0/edit? ... sp=sharing

The last hurdle for JMU moving to FBS Sun Belt has been cleared after the state legislature approved their financial plan. The state of VA has rules in place regarding what % of your athletics budget can be funded by student funds...JMU had been using a TON (way more than any other FCS school) of student funds for their athletics. They will have to scale that back quite a bit in this process, but they apparently have a plan to do so that met the standards that the legislature has set in place for them.

With that, here's what the new Sun Belt will look like (assuming UALR and UT-Arlington are still there, although I've heard rumors that they are planning on leaving the Sun Belt, since the Sun Belt is a very football-focused league, and they're the only 2 without football). 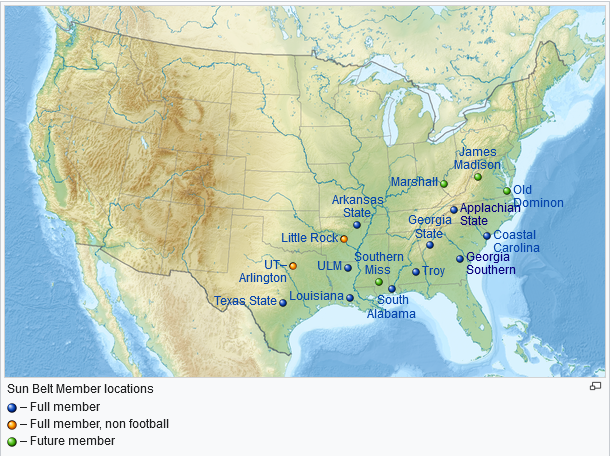 Wow, official news coming in fast and furious today. C-USA is officially adding Jackonville State (who just recently left the Ohio Valley for the ASun), Liberty (was Independent FBS), New Mexico State (who had been in the Sun Belt before the conference voted them and Idaho out due to geographical issues...had been independent FBS for the past few years as well), and Sam Houston State (who just recently left the Southland for the new WAC).

Lots of interesting "side stories" in this one:
- Sam Houston State is going to have to do some stadium remodeling. They currently play in a stadium very similar to Hanson Field, but with a bit nicer press box and less seating (holds 12.5k fans).
- This probably ends (for the forseeable future) the "Battle of the Piney Woods"...the annual rivalry game between SHSU and Stephen F. Austin. It had been the second-longest rivalry in the FCS, and as of 2010, had been held in Houston at NRG stadium in front of generally 25k+ fans. Stephen F. Austin is moving to the WAC like SHSU was originally planning.
- This is also a hit to the ASUN, who had just recently added Jacksonville State and included Liberty as a non-football member. If you include Austin Peay, who has said they're joining in 2022, they have 5 football playing members...which just ain't enough (Austin Peay, Central Arkansas, Eastern Kentucky, Kennesaw State, North Alabama). And that's assuming C-USA doesn't invite up someone like Kennesaw State or Eastern Kentucky.
- With news that the CAA (who just lost JMU to the Sun Belt) is possibly targeting the Big South's North Carolina A&T, which would put the Big South at 7 football members. Does the Big South and ASUN end up merging to keep enough teams?
- These additions make the "Battle of I-10" annual rivalry game between New Mexico State and UTEP into a conference game (they're only about 40 minutes away from each other)

With Powerhouses like JMU and SHSU leaving, so does a lot of fan interest in FCS football.  Look for some kind of new conference to be created with the remaining powerhouses from the Valley and Big Sky.  The new conference would be ripe with rivalries from the Dakotas through Montana extending to the West Coast.

Either that, or the Dakota powerhouses will get sucked up by some FBS conference.

sealhall74 wrote: ↑Fri Nov 05, 2021 3:05 pm With Powerhouses like JMU and SHSU leaving, so does a lot of fan interest in FCS football.  Look for some kind of new conference to be created with the remaining powerhouses from the Valley and Big Sky.  The new conference would be ripe with rivalries from the Dakotas through Montana extending to the West Coast.

Either that, or the Dakota powerhouses will get sucked up by some FBS conference.

At this point though, you're not likely to have the Dakotas get invited up because there's nobody to do it. I guess technically C-USA could maybe invite in the Dakotas and Montanas as a "northern division" of C-USA, but that's pretty unlikely, I think. The Mountain West isn't looking to expand at this point since Colorado State and Air Force said that they are sticking with the MWC, and that's about the only other FBS option for the Dakotas. Unless something along those lines happens, I don't see much going on with the MVFC and Big Sky. Both are pretty stable and fairly well removed from the south and east where most of the movement is happening lately.

It really depends on how "greedy" the C-USA is, and I think it's much more likely that they'd invite up EKU (historic success, big stadium, not far from Lexington, KY) and/or Kennesaw State (big school, essentially the "Atlanta market", room to expand their stadium quite a bit).

Also, a bit of info about JMU...apparently part of their presentation said that they actually lose $600k-$700k whenever they make a deep playoff run. In the Sun Belt, the conference helps cover costs for bowl games, so from a postseason perspective, it might actually be cheaper for them to be G5.

Sounds like Middle Tenn is going to Conf-USA instead of MAC. Western Kentucky will go to the MAC if invited.
Top

meganeck wrote: ↑Wed Nov 10, 2021 10:15 am Sounds like Middle Tenn is going to Conf-USA instead of MAC. Western Kentucky will go to the MAC if invited.

Well, "sticking with" is probably more appropriate. They are currently in C-USA...looked like they were going to bail, but after the additions that C-USA has made, decided to stick it out.